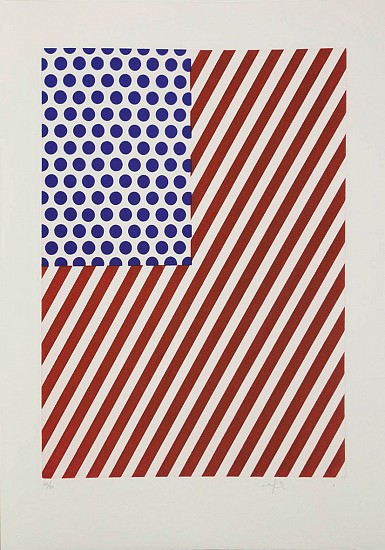 Folio. Eleven poems by Allen Ginsberg in English and French illustrated with ten full page colour etchings by Lichtenstein, each initialled by the artist in pencil. Loose as issued in original publisher's wrappers, in original chemise and slipcase. From the edition limited of 80 copies, signed by the poet and artist. Edition of 80 copies.

Motion, in the face of this fixity, becomes more imperative,” Helen Vendler wrote in the New York Times, in 1973, when Allen Ginsberg’s The Fall of America poems were released. She was describing on Ginsberg’s elegiac new work, reflective of the end of an era in which spontaneity had come to constitute an aesthetic in itself.

Ginsberg published The Fall of America as part memoir, part travelogue, reminiscing about dead friends and lovers, and prosecuting American participation in the Vietnam War. For La nouvelle chute de l’Amérique, Ginsberg selected eleven poems from his collection to be illustrated by Roy Lichtenstein, with ten original etchings, each one being signed by the artist. The result is a folio object containing a rare coalescence of two distinct sensibilities.

Lichtenstein, an American master of caricature, added a visual representation, giving an image to the disruption for the American political landscape, thereafter. As Ginsberg said, “poetry is not an expression of the party line. It’s that time of night, lying in bed, thinking what you really think, making the private world public, that’s what the poet does.”

The book was published in Paris by Les Éditions du Solstices (a members-only club for bibliophiles) in 1992, in a small edition of only eighty copies. There was also an edition of only the plates printed on Japanese paper in an edition of forty-five: text in both English and French, the poems translated in part by Anne- Christine Taylor, an ethnologist and retired head of research at the Musée du quai Branly. Issued in the publisher’s wrappers, the folio is conserved in the original blue cloth chemise and red slipcase with a white letterpress title.

This edition was printed for Robert S. Pirie (1934–2015), a bibliophile who was proud of his spot on President Richard Nixon’s “enemies list.” Pirie was one of the few Americans admitted into the prestigious Roxburghe Club, the world’s first bibliophile club, founded in London in 1812.

In this volume—half modern artist book, half protest poetry—might have seemed out of place in Pirie’s largely sixteenth and seventeenth century collection, except for its status as the particular treasure of a collector who recognized the significance of a partisan split in American politics, with art being one way to transform the ridiculous into the sublime. 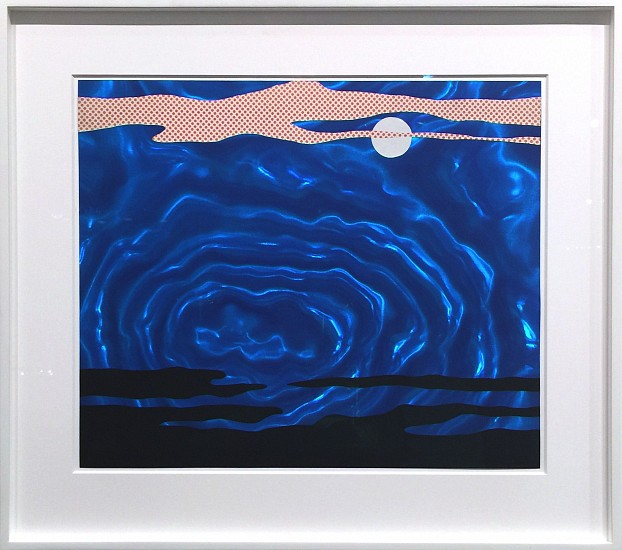 Roy Lichtenstein | Moonscape, from 11 Pop Artists I | 1965 | Zucker Art Books
Tip: You must first enter a valid email address in order to submit your inquiry