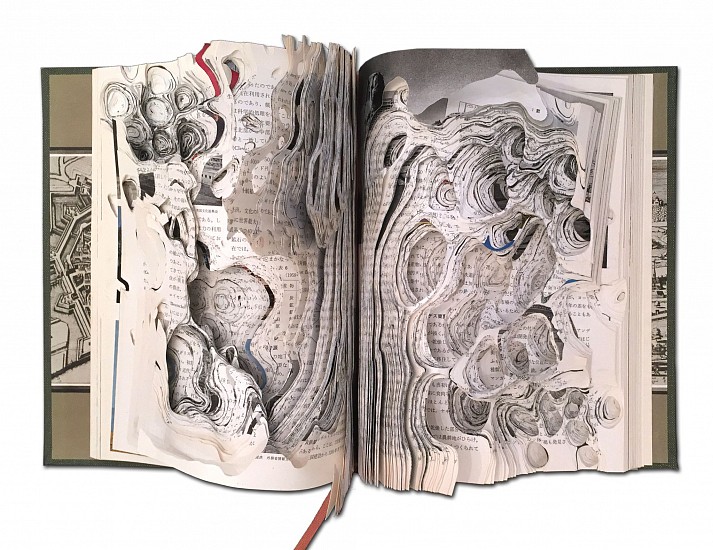 Japanese encyclopedia, hand cut by the artist. Evoking annual rings of a tree or a topographical map or waves, the artist entered incisions and drawings into an encyclopedia, playing against pre-set patterns and stretching the properties of the material to extreme lengths.
*This copy was exhibited in 2004 in the show Talespinning at the Drawing Center, New York. 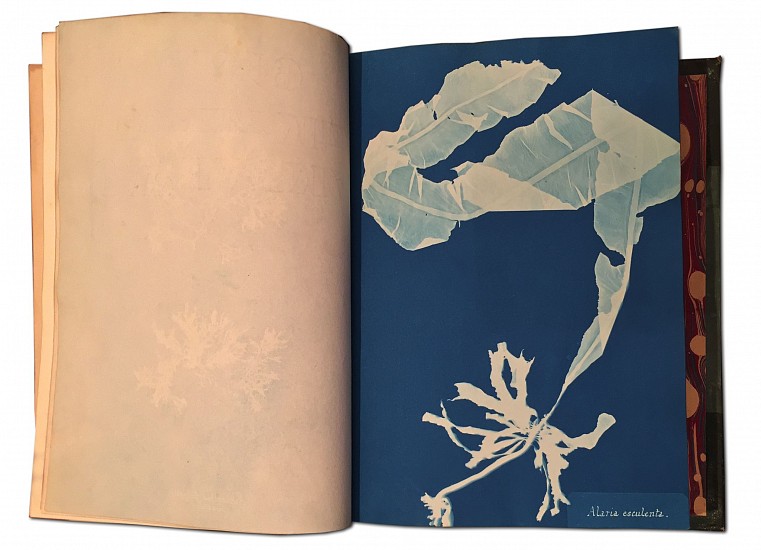 Recognized as the first book to be photographically printed and illustrated, it is a landmark in the history of photography, employing the new process of cyanotype invented by Sir John Hershel in 1842. The plates were made by placing the dry specimens on light-sensitive paper and then exposing the sheets to sunlight. Self-published and printed in a limited number of copies for private circulation, each unique, comprising 306 elegantly arranged photographic prints of seaweeds listed in alphabetical order, with captions hand-written by Atkins. This copy is a rare volume that has remained in a private library for many years; bound in green morocco leather with a hand-written inscription.

Drawing inspiration from principles of mathematics and physics, Auerbach’s work straddles conceptual art, abstraction, and design. With an evocation of graphic art, this book demonstrates systems of logic pictorially. Each sheet has an array of cutouts used as spray paint stencils to create a pattern of circles and tubular pill shapes. Spray paint on plotter cut Bristol paper with cloth binding. Card inserted in the book serves as the colophon.
Edition of 10 copies. 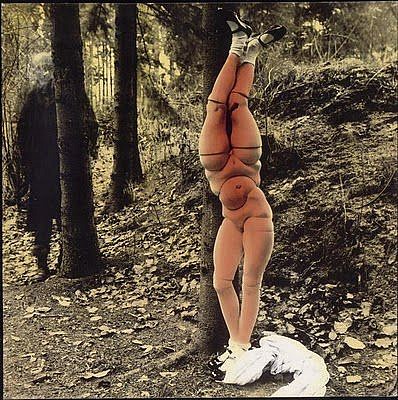 15 hand-colored gelatin silver prints all mounted within the book. The artist took a series of photographs of doll­s—a frequent subject for him—in various states of dismemberment and

rearrangement in settings he called “the necessary background of vice and enchantment.” The text consists of fourteen verses by Paul Éluard. Signed in pencil. 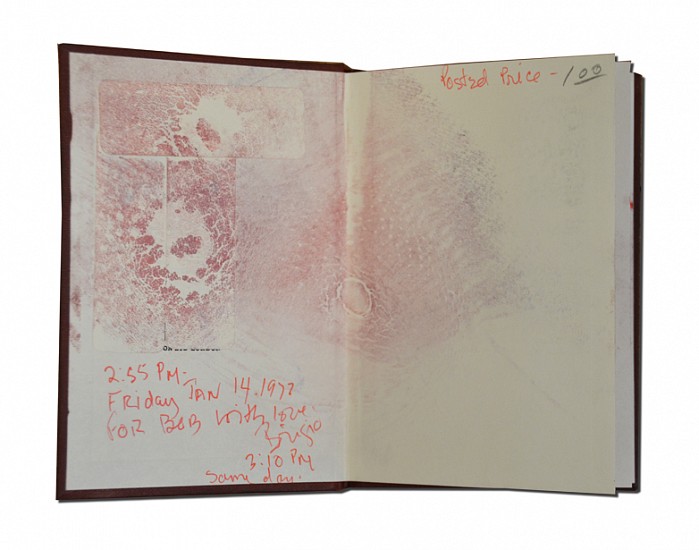 Former Warhol Factory acolyte, Berlin narcissistically documented her life via Polaroid photographs. This book is a unique example from a series of “tit paintings”—colorful prints made by pressing her painted or inked breasts on paper. Inscribed “For Bob with love, Brigid.” Ex-collection Robert Rauschenberg. 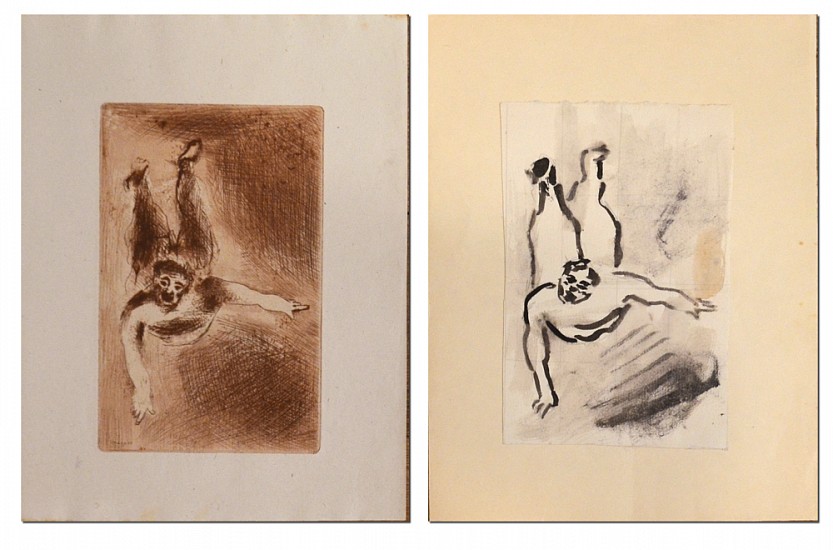 15 etchings and one etching printed in sanguine, with two additional suites of the 15 etchings printed in sanguine (one on China paper and the other on Japan paper), with an original pen and ink sketch for one of the etchings. The text contains essays by Jean Giraudoux, Paul Morand, Pierre Mac Orlan, André Salmon, Max Jacob, Jacques de Lacretelle, and Joseph Kessel. Publisher: Simon Kra, Paris. Printed by Louis Fort. This is one of 15 deluxe copies on Japan paper, from an edition of 300. Numbered 4 on the justification with the drawing.

A celebrated example by the most accomplished artist of the Shijo School of the Edo Period in Japan. The color woodblock printing is sophisticated, imitating accurately the effects of the watercolor brush. There are amusing devices such as turtles aiming bow-and-arrow at a spread lotus leaf held out by another turtle; depictions of ordinary life of the fishermen coming home with their catch; bold and excellent compositions of flowers and leaves in a remarkable number of colors; a boat party on a lake by the mountains; a bird flying into wisteria; a marvelous great kimono whose wearer sits at her calligraphy. Jack Hillier, an authority on the art of the Japanese book, used the illustration of mountain pines on the cover of his definitive study on the genre Ehon. This is a superb copy, the printing particularly clear. Thread-bound book; 26 illustrated sheets and three sheets of text; woodblock; ink and color on paper. Signed, with red seal. JH 325. 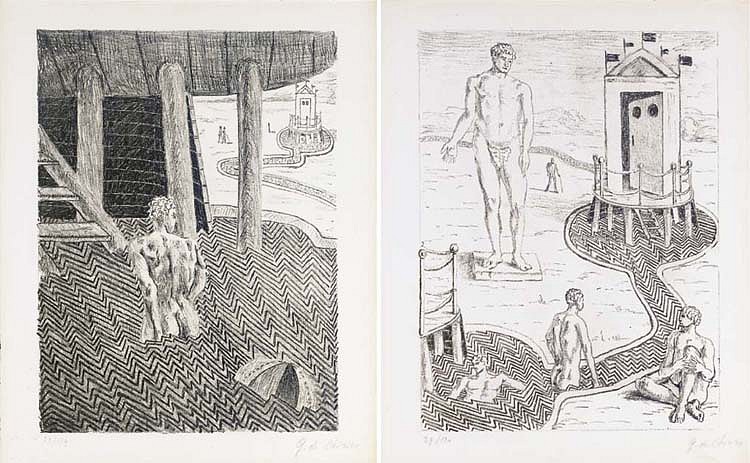 Paris: Éditions les 4 chemins
Printed calligraphic title, ten leaves of printed calligraphic text and colophon, text by Jean Cocteau; the text is lithographed from the author’s manuscript. 10 lithographs, nine hand-colored by de Chirico. Loose sheets in cream paper portfolio. This copy has a dedication and includes a drawing by Cocteau, dated 1949, on the title page. This author’s copy (H.C.) lacks signatures on the plates; the one uncolored plate is numbered 116.
Copy no. 114 of 130 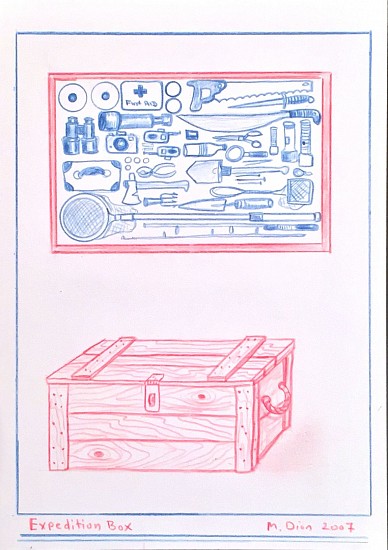 In his first book project Dion assumes the guise of an 18th or 19th century scientist who explores an unknown land (he kindly includes a buffalo leather pop-up map of this terra incognita) and exhaustively documents the native flora and fauna. The book is exquisitely constructed to convincingly carry out this fiction: pieces of paper are die cut and assembled and bound into the book to suggest an impromptu but thorough record of the explorer’s discoveries and observations. Contains twenty-seven bound-in lithographs, offset printed; six bound-in digital prints; five loose lithographs, offset printed; and two loose digital prints. Edition of 36 with 9 A.P.; deluxe editions 1-6 each include a unique drawing in colored pencil. Quarter bound in buffalo leather with Zerkall Nideggen paper and Zerkall German Ingres. Slipcase. 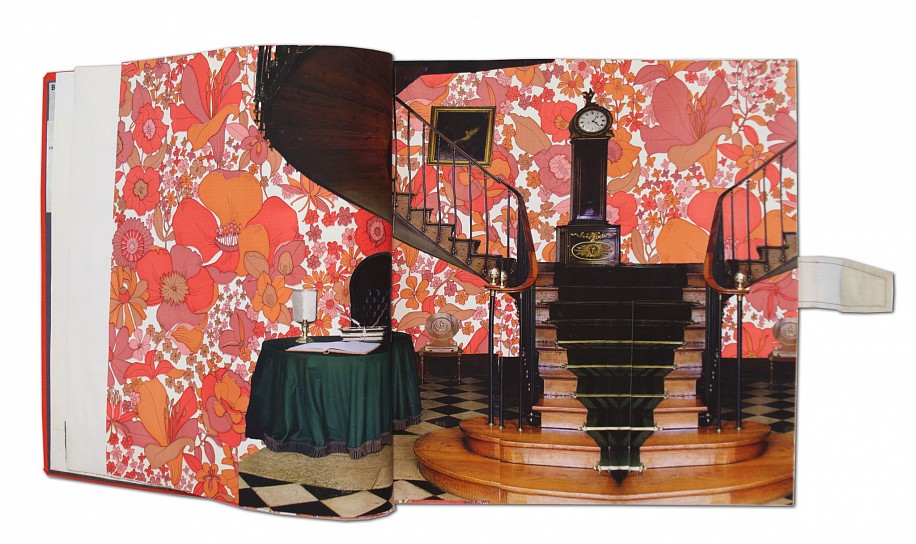 This unique book arises from the artist’s fascination with the Baroque and with the notion of excess and accompanying ruin. She was drawn to the photographs of the Château de Groussay in France, once owned by the bon vivant and aesthete Carlos de Beistegui. Images of objects and interiors of the château are cut and manipulated by the artist, then collaged onto pages of a found object, a wallpaper sample book juxtaposing the opulence of the interiors with 1960s kitsch. Each of the 80 Unique Books comprises 230 pages featuring one black and white photograph, the same image repeated on the right hand side of each double page. The books were then bound with paper covers of differing color, each bearing a specific title, in this case Rosemarie Trockel at Peter’s. Many of the images were taken in the 1980s and show scenes of

Kippenberger and/or friends of his. The books were then

inserted in a hollowed-out standard edition of the Swiss

Magazine Parkett no. 19. It was the first volume of the First edition. This book is based on the photographic research for Korine’s 2009 film directorial project of the same title. Released on lo-fi VHS and edited in part while blindfolded—or so Korine attests—the 78-minute movie follows a gang of miscreants who roam the streets of Nashville, molesting garbage bins and causing random mayhem. Includes a collection of stills, source material images, and painting reproductions, alongside Korine’s sparsely written text. 128 pages of 48 color and 30 b/w images. The text is an analysis by Ortiz of the work of Lam; with a dedication to A. Winter and a full page drawing made in 1951.

The tree, a living organism, in appearance so closely resembling the human figure, is a central element in Penone’s work, especially when he transforms actual trees into sculpture or casts them in bronze. Imprint techniques are significant as evidenced in this soaring life-size scroll in the medium of frottage on paper (created by rubbing charcoal pencil over the tree trunk and cross-section); mounted on canvas, suspended on a wood roll. Each frottage is hand-made, thus unique.

Signed and numbered AP from the edition of 30. As part of his artist project for Parkett vol. 40/41 Sigmar

Polke collected offset run-up sheets from the regular print run of the publication. These sheets, which are usually discarded, result from printing the same sheet multiple times to test the

calibration and proper working of the press at the start of the printing process. The sheets were randomly assembled and bound as unique books. Polke was interested in such chance processes, which accidently juxtaposed seemingly unrelated pages, texts and images. Approx. 80 pages. Edition of 25 copies and 10 A.P., each unique, signed and numbered. The artist selected antique history books of the early 20th century, published at the time of WW I. Each altered book contains collages, drawings, texts, incisions, as well as

Hillary Clinton, among others, juxtaposed on the book’s original images and texts, which glorify military might.

Copy 1 of 10 unique books, plus 3 artist’s proofs, signed and numbered. 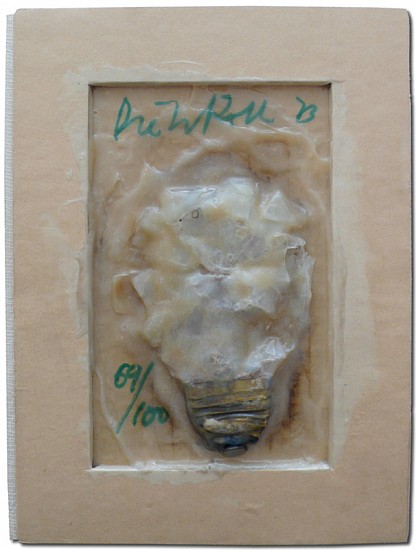 Published by Hansjörg Mayer Stuttgart, London, Reykjavik; printed by Staib + Mayer Stuttgart; cover design by J. Filzen, New Haven.
With an introduction by the artist. 256 pages offset; stitched softcover. 1000 copies with 100 copies as a multiple designed by the artist; encased with a corrugated cardboard cover with crushed light bulbs embedded in glue on each side, resulting in unique versions.
Copy no. 89 of 100, signed and dated 1973. DR. CW. 20, # 44. 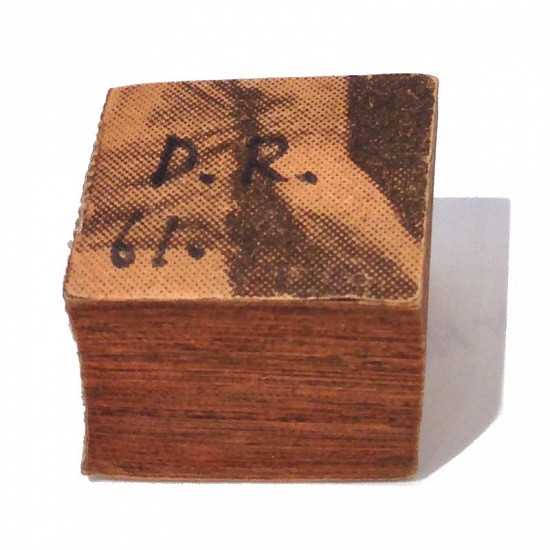 Hollywood: Heavy Industry Publication, self-published
78 leaves enclosed in a black portfolio, hard cover clamshell box, lined in white silk, with title embossed in silver on the box top and the edge. 75 leaves are animal, vegetable, mineral, and chemical stains hand applied on Eagle Paper Coupon Bond 100% cotton paper; one title sheet is printed black on heavyweight rag paper; one colophon is signed and numbered on white leaf; and one sheet, listing the stains used, is printed black on white leaf. Excellent condition. Signed “Ed Ruscha”. Engberg B9.
Copy no. 12 of 70. Berlin: Holzwarth Publications
Between 1994 and 1995, Christopher Wool shot a series of photographs in downtown New York City that he named
after a street on the Lower East Side, the neighborhood where he works. Taken at night using a 35 mm camera, the pictures feature the city’s signature streets with dilapidated storefronts, fences, and ramshackle staircases leading up to anonymous spaces. First edition, first printing. Limited edition of 160
copies with an original 10.2 x 15 cm black and white Type-C print
by Wool, enclosed in a Mylar sleeve and archival white
envelope, and stamped in black ink (Christopher Wool –East Broadway Breakdown. Special Edition) on the
title page; housed in a TrueCore (Light Impressions) archival box with the same stamp in black ink on the top cover. The print, which corresponds to one of the 160 reproductions in the book, is signed, dated 2003, and stamped on verso (Christopher Wool–East Broadway Breakdown. Special Edition).
Copy no. 107 of 160 Torquay: Cockrem for the author
5 volumes with 236 pages of seaweed specimens affixed to the pages with paper strips, or mounted on paper sheets pasted in, each species with letterpress labels pasted beneath. The fifth volume is a supplement which adds some rare species from the coast of Cornwall. Verso pages bear beautiful shadow impressions of specimens on recto. In very fine condition. Stafleu and Cowan VII, 18.389.